Psoriasis and other skin conditions 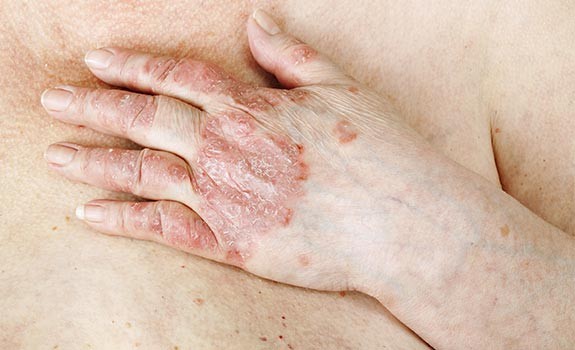 If you were told that skin infection is caused due to an imbalance of the body would you believe it? It is a fact that skin ailments are caused by the vitiation of the doshas of the body. And Psoriasis is a chronic skin disease that seems to be afflicting a large number of people in the world today.

Psoriasis is often seen appearing with red scales and patches and itching formed generally on the body and scalp. This can be an extremely irritating condition to handle both physically and mentally and often cause other issues for the patient. In western medicine steroids are often administered to control the ailment which in the long term brings on several side effects.

However, with Ayurveda the entire treatment plan is to treat the source of the problem and not merely the problem. Hence we see Psoriasis being treated by removing the toxins that manifest as skin ailments.

Psoriasis which is a chronic skin disease can sometimes be painful though it is not contagious. And depending on the severity it can also be cured. However, the patient needs to make some major changes in their lifestyle to see some results.

Panchakarma is often recommended to remove the toxins for Psoriasis patients. We have helped several patients who have come to us with this ailment. We include administration of medicated ghee (sneha-panam) which helps loosen accumulated specific toxins of the blood which are eliminated from the body through either vamanam (emesis) or virechanam (purgation) or both of them together. Some of the external procedures like taila-dhara and takra-dhara are specifically carried out to change the texture of the skin while most of the internal medications help purify the blood. This ensures that the cells stop growing at such a rapid pace.

Have Questions? Consult our Doctors online now to get the answers

© 2023 The Health Village. All Rights Reserved.
Powered By seeroo