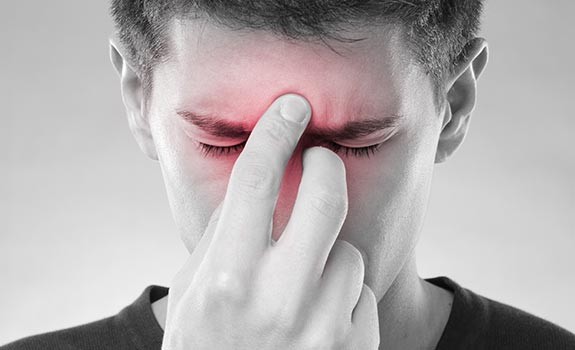 Sinuses are air spaces in the bones of the face that ultimately communicates with the nasal cavity and are lined by mucosa. Inflammation of this mucosa leads to what is called Sinusitis. So what are the symptoms of Sinusitis? If you are complaining of severe headache, heaviness and tenderness over the affected regions it is sure signs of a sinus attack.

A sinus attack can be extremely debilitating and can pull you down from your daily activities. At The Health Village we effectively use Ayurveda to treat the symptoms Of Sinusitis. This condition is called Sushta Prathishyayam in Ayurveda and both internal medicines and therapies are used to relieve the complaints. Nasyam (medicated nasal drops) is an effective ayurvedic sinusitis treatment included under Panchakarma which removes the accumulated toxins from these areas and provides a long term relief. Internal medicines also aid in pacifying these aggravated toxins.

While under Ayurveda Sinusitis treatment the entire respiratory tract is taken care of and the medication will ensure that there are no instances of repeated complaints. The sinusitis patient is of course advised certain changes in diet and lifestyle and they are both equally important in treating the complaints.

In Ayurveda, Sinusitis and other ailments are treated in tandem with medication as well as changes in lifestyle which contributes to many of the illnesses in modern times. The imbalance of the three doshas caused by restricted channels in the sinuses leads to several chronic symptoms. Pollution in the air, weather patterns and of course lifestyle problems like lack of exercise, junk food and inadequate sleep are all reasons for a sinus attack.

Drink plenty of warm fluids which are gently spiced with healing herbs. Eat plenty of vegetables to ensure adequate intake of fiber to keep the digestive system in balance. And of course you need to avoid cold beverages and foods to pacify Vata and Kapha in your body.

Have Questions? Consult our Doctors online now to get the answers

© 2023 The Health Village. All Rights Reserved.
Powered By seeroo